In a previous post I talked about why it's important to set up your Jupyter notebook environment to be reproducible, yet simultaneously be kept isolated from your other project. In this post, we're going to look at how I do that.

The nice thing about this is that pretty much every part is modular, so you can adopt the parts that work for you at the moment without having to adopt all of them. The only part that's needed for some of the other parts to work is to create an environment for your notebook.

The only prequisites are:

Additionally it will help if you are familiar with Python packages and the setup.py file. I'll try to write this so that if you're not familiar with these concepts, you get enough information here, but to cover every aspect of them would make this post way too long.

Remember from before that we have 5 goals. Those goals, and the solutions to them, are:

If you've never used them before, a Conda environment is basically a separate installation of Python that can have it's own packages and even non-Python libraries. When you install Anaconda, it creates one environment for you - the "base" environment. Unless you turned off auto-activating that environment, whenever you start a terminal you probably see a prompt that looks like this:

Conda has detailed documentation about environments. Here I'll just focus on the essentials. To create a new environment, we use the conda create command, which looks like:

This will create a new environment named "demo-env" and install Python 3 and the ipykernel package. (The =3 in python=3 tells conda that it can only install a Python that is version 3. In contrast, we don't require any version for ipykernel. And yes, you should be using Python 3 now, not Python 2.) We'll need both Python and ipykernel for any environment you want to use with a notebook, so it makes sense to install them both from the start. (If there's other packages that you know you'll need, like matplotlib or numpy, you can list them here too.)

You should see the environment name in parentheses before the $ change to say "demo-env". This tells you that you have the "demo-env" environment active. If so, we can link this to Jupyter with:

The "Installed kernelspec in..." message tells you it was successful. Let's break this command down:

Once we're done with this we can deactivate the "demo-env" environment to go back to "base" with:

The is an alternate way to link Jupyter to your environments, described by this StackOverflow answer. I've had trouble with it in the past, so I stick to the `ipython kernel` method. Also, the alternate way should make all of your conda environments available to Jupyter automatically. For you, this might be nice - but I have more environments for non-notebook projects, so I don't want those cluttering up by Jupyter launcher.

Using our environment in a notebook

Now let's fire up Jupyter Lab and create a new notebook. When we do, the launcher will present a new option. Now we can create a notebook or console that uses our "demo-env" kernel. (This will be the name we gave to the ipython kernel command, not the conda create command - if those were different.) Here's what my launcher looks like (I have quite a few kernels). 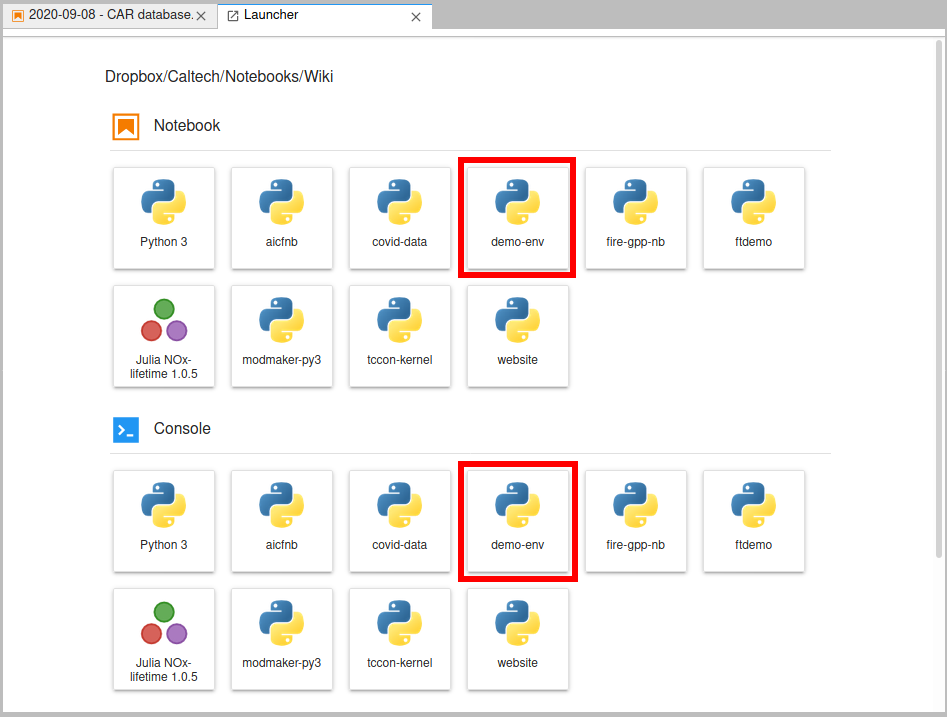 If you happen to launch Jupyter Lab from the command line and you get an error like `jupyter-lab: command not found`, make sure you've deactivated the "demo-env" environment and you're back in "base". We haven't installed Jupyter Lab in that environment, and we don't have to!

If you click on the "demo-env" box under "Notebooks", you'll get a normal notebook. But if you look in the upper-right corner, you'll see it says "demo-env". Normally that would say "Python" or "Python 3". That tells us what kernel the notebook is using. If you click on it, you'll get a pop up box that lets you pick a different kernel - so if you started a notebook using the base "Python 3" kernel, you can always switch to a custom kernel, for example. 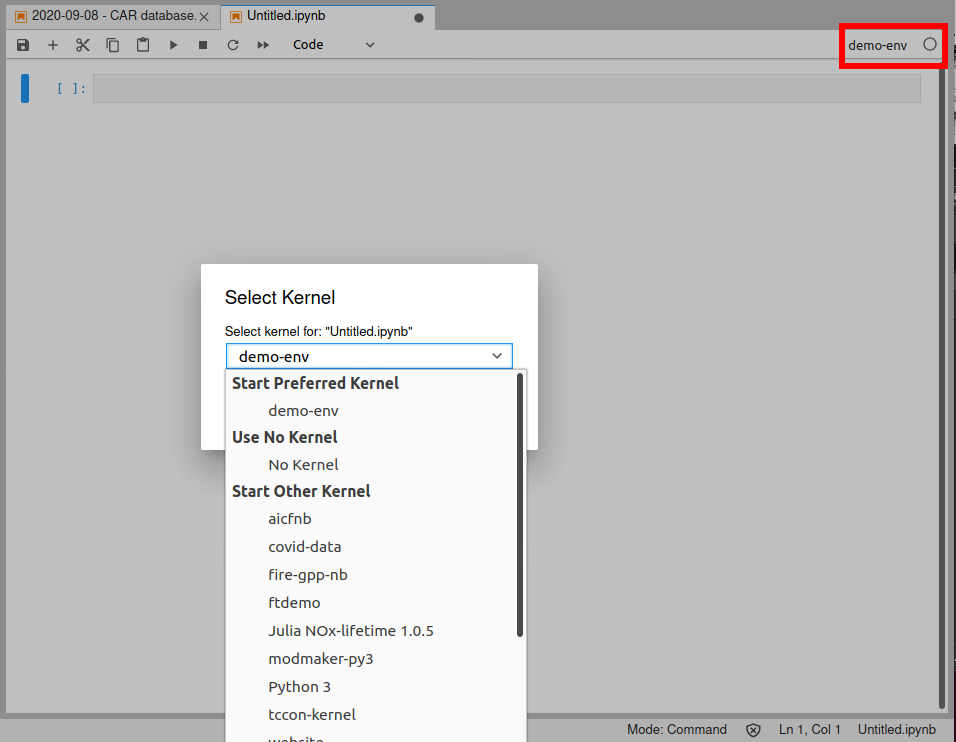 Note that if you do switch kernels, it's like any other kernel restart - you lose any variables/functions/etc. that were defined in the notebook, and you'll have to run all your code from scratch.

We can prove this is using a different environment a few ways. First run the code below in your notebook:

Now you can install packages in this environment, and not worry about screwing up other environments. As long as you create one environment for each project you're working on, you don't have to worry about one project messing up another one. Speaking of installing...

You'll want to install packages from the command line. Don't use the %conda magic in the notebook as that will affect the "base" environment and not our custom one! Instead, go to the terminal and activate your environment, e.g.

Then you can use conda install to install new packages:

replacing "demo-env" with whatever you called your environment. Even if it doesn't list any packages, this message means it succeeded. Then to delete the kernel, do:

Answer "y" when prompted, and this message indicates the kernel was removed - it should no longer show up as an option for your notebooks in Jupyter Lab.

Whenever you add or remove a kernel, you may need to restart Jupyter Lab to see the effect.